The origin of our favorite food, the Taco

Everybody loves tacos and we at Taqueria Seta, the newest taco restaurant in Poblacion Makati take preparing our Mexican street style tacos very seriously, so you can enjoy the eating.

Tacos are a gorgeous and tasty dish consisting of a rolled and pressed tortilla (preferably corn, we will explain in a bit) which is filled with seasoned and spiced meat and other delicious fillings such as rice, vegetables, tomatoes and even fruit. But who invented the taco and when did it start?

The taco originated in Mexico. The word “taco” itself is from the Aztec word “Tlacoh” which refers to a combination of a maize tortilla with beans and peppers. Mexican food historians’ estimate the taco first appeared in the 1500s and tacos further evolved with the arrival of the Spanish. Maize corn is abundant in Mexico so it is what tortillas were originally made of, the use of wheat came further on as wheat was introduced by the Europeans.

Tacos were always seen as working class food. Mexico, just like here in the Philippines has very distinct regional cooking styles and dishes. Hence there exist many kinds of tacos based on their area of origin from fried, stewed, boiled and different combinations of filling. Even the tortilla itself could be corn, wheat or grilled, fried or baked. Many real tacos are made with “off parts” such as tripe or offal which we Filipinos also love! Proof of this is in our classic Filipino appetizer favorites such as bituka, bulaklak, sisig and tripe which are easily adapted into very tasty taco filling. 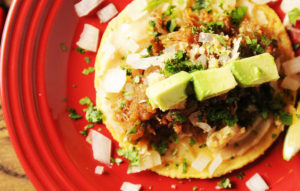 The taco’s appeal has endured and spread all around the world. “Tex Mex” is a very popular cuisine that has sprung alongside authentic Mexican fare having spread in the United States. It is easy to find all sorts of tacos from the traditional corn tortillas to wheat, the hard “U” shaped pre cooked taco shells (which coincidentally are a short cut made so the shells do not have to be freshly made) and even “Greek” or “Middle Easter” tacos which are traditional taco fillings in pita bread, a Mexican shawarma if you will.

We at Taqueria Seta try to deliver the Mexican street food taco experience by bringing a little piece of Mexico to Poblacion, Makati through our brightly painted areas and family style seating. We use imported maize flour for our tortillas because we are going for authenticity. We import our own peppers to get that extra kick in every bite to make our tacos the same as you would get in the streets of Mexico. Visit us to get a real Mexican taco experience in Poblacion Makati.

For further reading Where Did the Taco Come From?

We are located at 4988 Paz Guanzon, Poblacion, Makati